Jimmy – By 1867, just 18 years after opening, the cemetery was just about full.  An average of 1100 burials had taken place each year, or about 21 every week.  By the mid 1860s the problems of bodies close to the surface, open graves and seeping water saw a growing agitation for its closure. Neighbouring businesses complained of maggots and blowflies coming from the cemetery.  After heavy rain, the ground appeared to disgorge maggots – a stark reminder of the mortality of humans and the corruption that followed death, and an indication of the shallow depth of some of the graves.

On cold mornings a sickly damp mist hung just above the ground, while on hot summer days you could barely walk past it without a cloth over the mouth and nose. Of the 12 acres, four were enclosed in a high sandstone wall.  Grave markers and headstones from the remainder were removed and placed around the walls, inside the wall or taken away.  Those families that could afford to move their relatives did so, but most were left where they lay.  The cemetery was transformed into a park, Camperdown Park and the long term residents remain, just under the ground. I’ve had this bike for about 5 years and it’s nearly at a point where I could honestly say it’s done, nearly…

All my closest friends have had a hand in helping me with this bike, my first complete build. Not to mention my awesome wife Nicci for all her support/tolerance with my bike habit. This thing would still be a cobbled mess of parts without the help of my buddies Pap, Dylan, Gaz, Jeff, Uncle Frank and Timmy. You guys are the greatest.

Scored a stock ’81, in kinda running condition. Got it legal, chopped it and rode it a bit as a heap o shit for a while, then we tore it down and did it right. Measure once, cut twice! The frame is 4″ stretch and stupid low. We threw on 750cc barrels and pistons, combined with Hugh’s 277 crank and cam, with PMA and overdrive 5th gear. New cam chain and guide, all new cam and transmission bearings plus new chain and sprockets, valve stem seals, rebuilt 34mm carbs, progressive springs in the polished forks, new wheel bearings, tapered steering head bearings, and all new gaskets/seals throughout. Stock front fender on the rear plus new brakes with braided lines, and drilled rotors. Yes my bike has front brakes, turn signals and a speedo…. let the hate mail begin. The home made parts list is decent, we made the pipes, mid controls, seat pan, all the tank/fender mounts, sissy bar, brake stay and relocated coil mounts. Not to mention modifying a lot of parts as when you change one thing, you change three. Thanks to Hugh’s PMA kit this bike runs battery-less, plus we ditched the starter motor and ALL the reduction gears, this is a kick only bike. Less kg’s=More HP’s. It’s a two kick bike, one to prime and one to ride. Loads of power, but still running stock valves and clutch, so it doesn’t hook up quite like it should. 8 plate clutch is on the wish list! The paint is done by yours truly and you either love it or hate it. I love it! Thanks to my boy Dirtnap Pap for shooting the photos.

Our blog is Dirtnapcycles.blogspot.com. Insta is Jimmy_Dirtnap  – Excerpt from camperdown-cemetery. Oh and if you didn’t figure it out, the graveyard where we took the photos, they moved the headstones back in the 50’s but not the corpses…… Mind your step. Dirtnappers 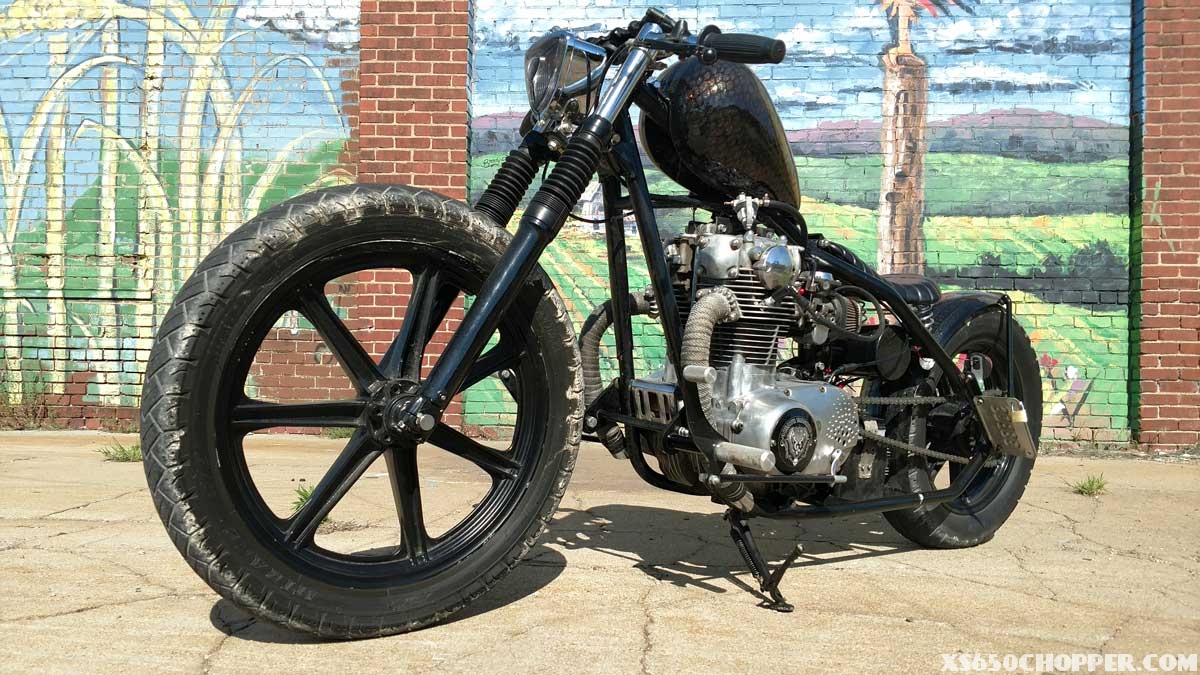